You are here: Home / Uncategorized / Normal Jitters for New Parents

New moms and dads are understandably jittery those first day and weeks after having a baby. Newborns are so tiny and look so fragile! An informal poll of our PINK clients, some new and not-so-new moms (and one mom-to-be!) revealed that although some of us have funny or unique fears, most of us also share a few very real–and very common–concerns when we become new parents. 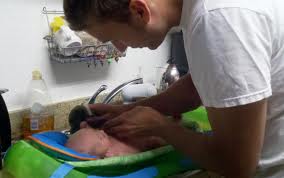 Top of the list is a fear of tripping or dropping the baby in some way(majority of this fear comes from new dads). Nancy admits she was shocked at how slippery her infant was when she was bathing her, and she says her nervousness made for some interesting baths, her husband would not even touch baby Edith. Several other moms agree that they worried they would drop their babies or trip or fall down the stairs while carrying them. One of PINK’s mom-to-be reveals that she is worried she’ll “bonk” her baby’s head while walking through doorways, because she’s always hitting her own elbows, shoulders, hips, and feet. She’s also concerned her baby will inherit her clumsiness! YIKES!

Worries about sleep or breathing come in second on the new moms’ lists of worries. Concerns about positioning the baby and making sure he or she is breathing correctly causes a lot of jitters. One mom says her husband would fall asleep holding the baby, and this caused her great concern because he is a heavy sleeper. Another was so worried that she wouldn’t hear her baby cry and wake for feedings during the middle of the night that she set her alarm. (This turned out to be unnecessary as you can image :).)

While it may not ease all of a parents’ fears while she and her baby sleep, it is important to remember that today’s pediatricians recommend that parents remove blankets and stuffed animals from the crib. Use only a fitted bed sheet that tightly fits the mattress. Remember to place the baby to sleep on his or her back only, and check on the sleeping child often.Consider dressing the baby in a warm one-piece sleeper instead of using a blanket. And never bring the baby to sleep in your own bed with you, which can lead to a risk of rolling over on the child and hurting or smothering it.

Even before the baby is born, jitters are common: most parents worry at least a little bit about physical or cognitive impairments, although most babies are born healthy. A couple of moms say they worried that their baby would turn out to be the opposite gender of what they’d been told during the ultrasound. “It wasn’t that I wanted a girl more than a boy,” says Amanda. “It’s just that I had already gotten everything for a girl!”

Of course, not all fears are founded, but that doesn’t make them any less real to moms who experience them. Brooke used to worry she’d forget where she put her son. “At first, still suffering from the effects of the anesthesia, I went to the grocery store and left the baby with hubby,” she says. “I started to pull out of my parking space to go home, and, in a panic, thought, “Where’s the baby?”

Another mother admits she was jittery about changing that first diaper, because she had never changed one before. “Then I saw the nurse handle him and realized newborns are a lot tougher than I thought,” she says. “He wasn’t going to break like a fragile piece of china.”

Least likely of all, but just as real, are jitters that some moms have about whether they will like their new baby, or whether they will love them as much as their firstborns. “I knew I’d love him, but love and like are two different things,” says Kate. “Turns out he’s the coolest kid ever, so I had nothing to worry about.”

Stay Up to Date

As baby experts at Pink, our studies show that not

FATHERS! You are the best! Happy Fathers Day! #fat

It’s very common for babies to spit up after fee

Transitioning out of the swaddle can be easy for s

•Looking for a stroller designed to hold more th

Mamas, hands up if you checked your little for bre

🦷Teeth vary in size, shape and their location i

This error message is only visible to WordPress admins